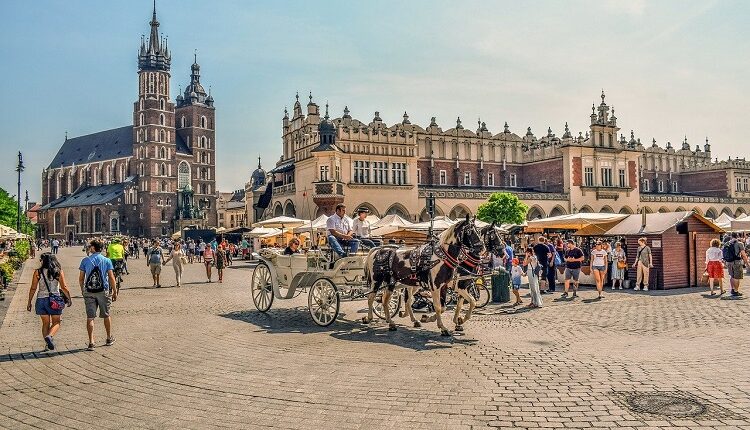 All Aboard in Krakow

Activities on the Vistula River: The Vistula River is 1,047Km long and runs almost the entire length of Poland, the river reaches a depth of 5m and at its widest point measures 1.5Km wide. Although swimming is discouraged in the major city areas you can in the more remote areas. Fishing for pike, catfish and chub is popular.

Day Cruises up the river are extremely popular especially in the warmer months, one place to visit during a river cruise is Tyniec. You can explore the castle and abbey then take lunch in the courtyard restaurant. The scenes are tremendous along the river banks and makes for a very pleasant daytrip for families and alike.

Evening Cruises remain closer to the city shores with boat trips offering a party atmosphere, music, DJs and entertainment provided specialised reps who organise a floating night club under the stars. This obviously appeals to younger generations. Dedicated event companies such as Krakow based Party Krakow offer exclusive boat and catamaran trips with added attractions like the traditional Stag Strip Artist show to give that extra zing to the Bachelor Party celebrations.

Moored Barges along the river banks have restaurants, pubs and clubs aboard with special events, occasions and promotions going on all year round.

Rowing and kayaking clubs are present in Krakow, some venues will rent out a kayak or canoe for you to paddle around the sights. Speaking of paddling the popular sport of paddleboarding is available too.

White Water Rafting, on the Dunajec River close to Krakow is another magnificent experience exploring the sheer beauty of the Pieniny and Tatra Mountain range. Aboard a raft to glide through the river valleys and the rush of white water currents makes this a most exciting excursion. You can also visit the many castles and fortresses along the route. Krakow also has an Olympic standard man-made WWR circuit which is open to the public to pit their skills in manoeuvring the rapids. Companies and sports groups often use WWR as team bonding exercises.

On Board in the City of Krakow: Krakow according to historians existed in the 7th century but official documents of 1190 show Krakow as the Royal Capital of Poland. The city was Europe’s main silk trade centre in the 12th century. The Golden Age of Krakow occurred in 15th century with trade, architecture and the arts coming to the forefront. Follow the legend of the Wawel Dragon that lived under Wawel Castle among many other sights and attractions displaying Krakow’s rich history. Today this enchanting city draws over 14 million visitors a year and Krakow has capacity, modern services and hospitality to welcome everyone.

Trams & Transport, Krakow has a very efficient public tram system which connects you to every part of the city, you can also buy a ticket via your smartphone but watch out for the inspectors if you don’t obtain one. Car sharing is becoming a much used service as it allows you to enter the area inside the pedestrian walkway called Planty, as access to the Old Town is limited.

E-Scooters, the roaring success of this simple motorised people mover has reached Krakow, so much so that the local council had to introduce regulations to reduce the rising accidents involving their use. However, the e-scooter is here to stay and provides a quick and easy way of moving around the city.

Horse & Carriage, these ornate and elegantly decorated carriages with the horses in feather crowns will take you to see all the sights in Krakow. A very romantic way to see the medieval splendour of Royal Krakow. They gather on the perimeter of the main square, Rynek, ready for you to board and enjoy.

Electric Buggies, offer a tour of Krakow’s most well known attraction accompanied with recorded explanations of the sights in many different languages. Board a buggy and take in the history, architecture and wonders for a 2hr drive through the Old Town and Kazimierz.

Hire a Bike, Bicycle points are all over the city centre and nearby outer limits if you are not a fan of e-scooters. Sturdy and well equipped it’s as simple as, well, riding a bike.

There are private companies that run services to aid the enormous amount of tourists that arrive throughout the year. You can board an airport shuttle bus or taxi or the airport train express direct from the centre to the terminal at Balice Airport. Stag, Hen and sports groups often get the party or tour going with the ever in demand limousine or party bus pick up.

The Party Bus, a luxurious mobile club awaits you. Once you are on board the music and lights flare up, the bars open and a your Krakow Stag or Hen Do or Sport Tour Weekend is off to a vibrant start. There are dedicated stag companies that take care of such entertainment- you can check e.g.: PartyKrakow. The Party Bus can be hired for a City Cruise too and up to 30 people can board the at a time.

Limo, Hummer, Cadillac & Stretched Hummer, provide the same service as the Party Bus but for smaller groups, each vehicle has a minimum and maximum number it can take on board with affordable tariffs to suit the group size.

Rome is not the only city that never sleeps, eternal Krakow is up there too. The buzzing atmosphere of this historic city either in the daytime or night will never make you feel bored, so get on board in Krakow one of Europe’s most popular destinations.

Five Ways To Protect Your Vehicle When Taking An Away Trip

How To Plan The Perfect Luxury Travel Itinerary

The Viking age and its influence on European history

What Is Special About New York City’s Apartment…

How To Plan The Perfect Luxury Travel Itinerary

The Viking age and its influence on European history

Things To Consider Before Booking A Cruise