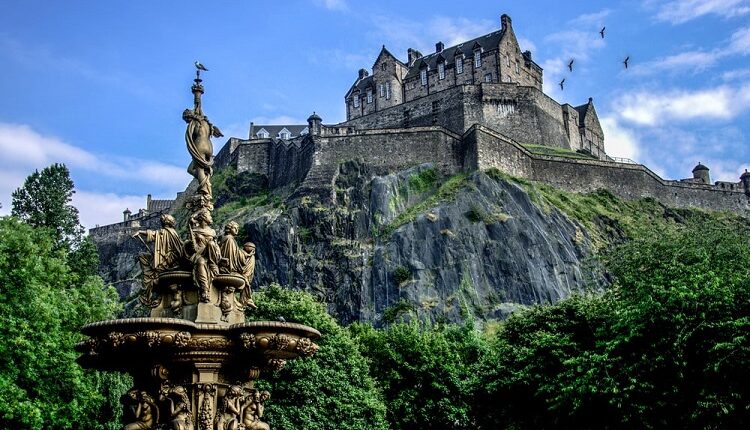 After grabbing your car hire in Edinburgh, you’re more than likely wanting to see the esteemed Edinburgh Castle. In the past, the monarchy resided and buried in the castle and many battles were fought over it. Now known as a world-famous tourist attraction, many flock to find out the thrilling history of the castle. So why not learn some extra knowledge about the castle before you go to impress friends and family with?

It sits on top of a volcano!

Yes you read that right! This castle rests on a 350 million-year-old volcanic formation in a neighbourhood known as Castle Rock. This rock sits 130 meters up from sea elevation, and the only easily accessible point is to the east of the rock, where the ridge slopes more gently.

Royals have lived (and died) in the castle

Many Scottish monarchs have resided in Edinburgh Castle over the centuries, from King Malcolm II after he captured Edinburgh to King David I during his ruling. Not only this, but Scotland’s famous Mary Queen of Scots was the mother of King James VI in the royal palace circa 1566!

Scotland and England fought for many a year over who controlled the castle, especially during the 12th Century, where it was passed from Scotland’s hands, to England’s, and back again as well as during the Wars of Independence.

Additionally, they contested over the Stone of Destiny (for over 700 years!), which was last used for the coronation of Her Majesty The Queen in 1953. Many Kings of Scotland were enthroned on this stone until King Edward I of England took it and erected a throne. Scotland then took it back in 1966 where it has resided since in the Crown Room with the Crown Jewels.

It was used as a military base

The castle was used as an area to build and store ammunition during the 15th Century and then in the 16th, turned into a military base. They rebuilt buildings, and added new ones, to house a huge garrison and jail prisoners from war. Many prisoners lived in their dungeons during the 18th through to the 20th century during wars such as the Seven-Year War, Napoleonic Wars and even WWI.

This Chapel was built in the early years of the 12th Century, and pays tribute to Queen Margaret who according to legend, succumbed to her broken heart shortly after learning of her husband and eldest son’s death in the Battle of Alnwick. This chapel has since been restored to use for weddings and baptisms and always ensures it has fresh flowers to welcome visitors.

What are Laird’s Lugs?

A lesser known fact, but if you go to the Great Hall, you will notice the barricaded window. This was used to eavesdrop by King James IV on meetings beneath the chamber during the 16th Century and is known as the ‘Lairs Lugs’ aka the Lord’s Ear.

A gift from the Duke of Burgundy

You may find the Mons Meg while looking around the castle, and wonder where it came from. This was a gift from the Duke of Burgundy to King James II in 1457. This medieval super gun had the ability to fire cannonballs weighing at around 400 pounds over two miles, and were three times the size of the average person’s head! Due to its weight, the sling was banished to Edinburgh Castle in 1829 after being too heavy to use in battle.

Listen out for the 1 o’clock Gun

The one o’clock gun used to be fired to allow ships sailing the Firth of Forth to check and adjust their chronometers. Today it still is fired every day (except Sundays, Good Friday and Christmas day) for visitors to hear. You can also see it up close and in action if you go to the Argyll Battery for 1pm, but wherever you are in the castle, you will still more than likely hear it!

We hope you enjoyed reading our post, and that you now have a wealth of facts to share with friends and family while touring the castle. These interesting facts are sure to wow whoever you tour with, and help give you a little insight into the exciting history of the castle.

All Aboard in Krakow

Is Hongkong the Best Place to Visit in 2021?

Facts You Need To Know About Hilton Head Airport